Book(s) Of the Week: "Carmilla" 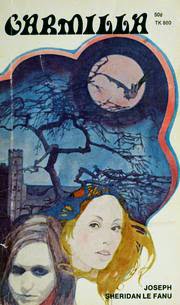 
When I was about 8, my mom went about getting rid of several crates of books she'd collected over the years. It was an annual thing to clean house by making a Goodwill donation stop. Of course I couldn't understand why she'd get rid of so many, so on our way there I dug through the crates. This particular book stood out to me, so I kept it and read it. The cover I posted in this article is the edition of Carmilla I found. There was something very alluring about the way the illustrator drew the girl's red hair. To this day I am glad I kept that book, because it became one of my favorites.

Some stories reach through time and refuse to age. The language used in them is neither overly-flowery nor simple. Carmilla is one of them.

The atmosphere is excellent, the story is a classic. If you are an avid fan of anything vampire-related, but you aren't yet ready to tackle Dracula or Varney, this is the perfect stepping stone into the classic genre.
Posted by ranranbolly at 12:27 PM No comments:

When I hear people tell me that Matthew Mcconaughey has only recently started doing more noteworthy roles, not only do I want to slap them silly...but I have the extreme desire to list out great films he's been in that have reached the 10+ year mark. I don't usually go that far, because for some reason people start to zone out if you give them movie nerd lingo. But I really want to.

This one is a favorite of mine, and each week I've considered talking about it...then looked back and thought maybe I just couldn't do it justice. I mean, not only does it have Mr. Mcconaughey, but it's directed by Bill Paxton. Obviously if you've watched that trailer up there, you'll note he's in it too. It's got Powers Boothe too, who I believe is an incredibly strong character actor in his own right. So from the get-go you'll note it's got a pretty strong cast.

Before I start, I want to tell you right now not to even think about looking up the ending if you haven't seen this movie. You'll deprive yourself of an awesome experience if you do...so I'm warning you, do not look up the ending. If you do, the god's hand killer just might have to deal with you.

It begins with a detective who's pretty much focused on finding this serial killer called...you guessed it...the god's hand killer. Then out of the rain, a strange man shows up in the middle of the night. He not only knows who the killer is, but admits to being the killer's brother. Thus the story really gets under way, as he explains his experience as a child growing up with his brother.

They were pretty normal kids in a small town with a good father who truly cared about them. But everything is pretty much destroyed when dad comes home one day to tell them he received a message from an angel that the apocalypse is coming, and he has to kill people who are "really demons." It really sounds just like an episode out of The Andy Griffith Show, if you think about it. Only instead of Don Knotts, the love-able supporting character is an axe and pair of old gloves. Also a pipe.

The younger brother, Adam, is all for it. But the older one, Fenton...something bugs him about this.

I really can't reveal any more without ruining it for you...but really. It's just fantastic.
Posted by ranranbolly at 8:23 PM No comments:

So I decided to dig through my pictures today and pull out a few of my favorite pictures of iconic movie couples/'couples' just so you know there are matches made in heaven, whether they're from hell or not.


Don't make me pick between Astin and Julia. It can't be done.

Posted by ranranbolly at 8:03 PM No comments: 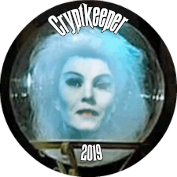 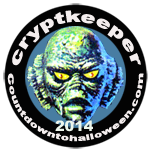